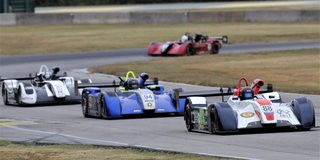 With more than 600 entries in this year’s Sports Car Club of America® National Championship Runoffs®, it’s no surprise a bunch of familiar faces can be seen in the paddock. But each year, there are some fresh faces, too. Take for example the young face of 14-year-old Owen McAllister from Mooreseville, North Carolina. McAllister began his racing career in karts, but soon took a DirtFish Rally School in order to improve his driving capabilities.

“The DirtFish Rally school really improved my abilities as a driver, but the biggest was car control. I became much better in the rain being comfortable in the car and controlling the limits of car,” McAllister said, adding that he believes he can now push the car to the limit because of the skills he learned at DirtFish.

McAllister is racing a Formula Mazda in the Runoffs this week. The DirtFish Rally School paid off as McAllister is leading the Hoosier Super Tour Points Championship at the moment and won the Northern Conference championship. This makes him a Super Sweep contender as he looks for a win at VIRginia International Raceway in a competitive Formula Mazda field.

Working with SCCA Pro Racing, SCCA classified the Ligier JS F3 to its Formula Atlantic Road Racing class shortly after its debut in 2018.  Designed to generate interest to club-level drivers and to maximize additional seat time for young F3 talent, the spec chassis runs the same HPD developed Honda Civic Type R engine and Hankook Tires at the club level as it does in the standard F3 Americas Championship season, allowing for seamless crossover opportunities.

“SCCA Pro Racing worked with the SCCA Road Racing department to find a home for the Ligier JS F3 chassis so that F3 Americas drivers could take advantage of additional seat time provided by their local region at Super Tour, Majors and Regional events,” said SCCA Pro Racing General Manager Sydney Davis Yagel. “Drivers like Kent can now use both their Road Racing and Pro Racing experience to tackle the famed Runoffs.”

Chassis designer and manufacturer, Ligier Automotive North America, is making the trip from its Denver, North Carolina, home base to VIR to support Momentum Motorsports’ Runoffs efforts. Ligier will have a fully equipped Ligier JS F3 on display at the end of Vendor Row, conveniently located right beside the Hankook Tire tent. F3 Americas’ partner HPD will also be on location with its trailer, offering support not only to Vaccaro but also to its dozens of Honda-powered drivers competing at the Runoffs.

When GT-3 takes to the track at 4:00 p.m. on Friday for their SCCA National Championship Runoffs® event, there will be a race within a race to crown the inaugural GT-3 Challenge Champion. The GT-3 Challenge presented by MPI, a series supported by Mazda, Max Papis Innovations, Penske Racing Shocks, AiM Sports and Hoosier Racing Tire was launched this year and is designed to support racers and bolster the tube-frame GT-3 class in SCCA competition with contingency money, prizes, subsidized entry fees and social events.

“We’ve been very happy with the GT-3 challenge series this year,” said David Cook, Manager of Mazda Motorsports Business Development. “GT-3 participation is up and for those who are participating, we’re getting to provide an enhanced experience for their loyalty to SCCA and GT-3 racing.”

The series consisted of five events across the country to crown Southeast, Mid-Atlantic, Midwest and Western GT-3 Regional Champions. Drivers Jeff Dernehl, Stacy Wilson, Rob Warkocki and Collin Jackson took each of those titles by scoring the most points across two events at the American Road Race of Champions at Michelin Raceway Road Atlanta, the Hoosier Racing Tire SCCA Super Tour at VIRginia International Raceway, the WeatherTech Chicago Region June Sprints at Road America, and Hoosier Super Tour at WeatherTech Raceway Laguna Seca. The Runoffs will be a fifth and final event where the highest finisher will take the crown and receive accolades from by Max Papis during the podium celebration following the GT-3 race.

For drivers looking to take advantage of the support and enhanced event experience, plans are developing to bring the GT-3 Challenge back next year building on the progress made serving racers during the inaugural season.

Keeping Up to Speed